My old man’s a white old man
And my old mother’s black.
If ever I cursed my white old man
I take my curses back.
If ever I cursed my black old mother
And wished she were in hell,
I’m sorry for that evil wish
And now I wish her well
My old man died in a fine big house.
My ma died in a shack.
I wonder where I’m going to die,
Being neither white nor black?

“It is easier to build strong children than to repair broken men.”

The Smithsonian’s National Museum of African American History and Culture announced the expansion of its Early Childhood Education Initiative (ECEI) with a $1.5 million grant from the W.K. Kellogg Foundation. Structured to be joyous and fun, this museum-based curriculum is designed to help young children of all backgrounds develop healthy racial identities and other social skills. Bridging the fields of early childhood education, human development, museum education and developmental psychology, ECEI programming encourages young children to be comfortable with human diversity, recognize unfairness and develop the capacity to stand against prejudice.

In addition to the on-site programming, the grant funds national outreach efforts and digital instructions and resources for research-based publications, adults, educators and young children from birth to eight years old.

“The work of early childhood education has the power to affect what society will be in the future,” said Spencer Crew, interim director of the National Museum of African American History and Culture. “If we want to end racism, we must begin to have purposeful conversations with children about racial identity and promote anti-bias values from birth. With an appreciation for differences in early childhood, young children can develop into adults who actively challenge bias, stereotyping and all forms of discrimination.”

The Kellogg Foundation’s Thriving Children initiative funds efforts like ECEI that support quality learning experiences for all children, including the promotion of racial equity in early childhood education. “In this way, the goals of the museum and the mission of the foundation are perfectly aligned,” said Carla D. Thompson, vice president for program strategy at the Kellogg Foundation. “This is an excellent match.”

The programming operates from the premise that young children need adults to provide accurate language for identifying racial identity and racial bias. Young children even need guidance to develop their concepts of fairness, which is the first stage in challenging racial prejudice and discrimination. 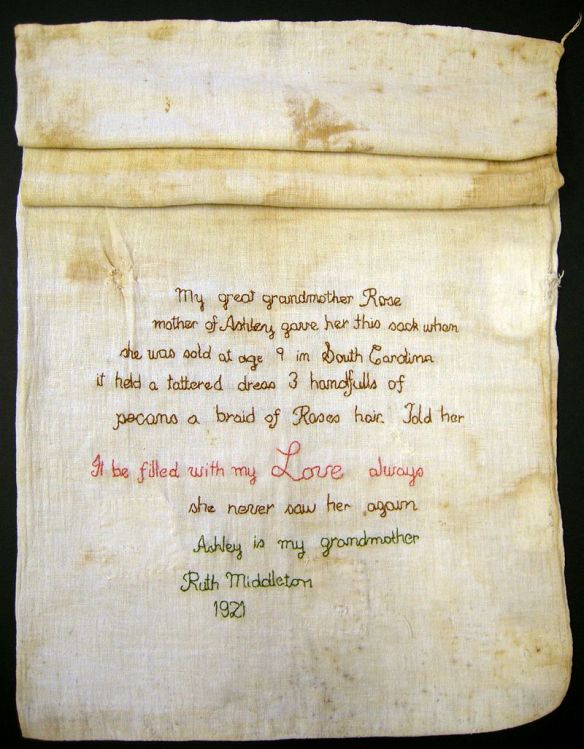 Ashley’s Sack is among the 37,000 objects at the Smithsonian related to African American community, family, the visual and performing arts, religion, civil rights, slavery, and segregation. This is an image of an embroidered cotton feed sack from the mid-19th century. The sack was embroidered by Ruth Middleton with the story of how the sack was a gift from an enslaved mother, Rose, to her daughter, Ashley, when the nine-year old was sold. / Photo courtesy of Shameran8 and Middleton Place under CC BY-SA 4.0

“Children are remarkably good observers who pay close attention to human behavior,” said Esther Washington, director of education at the National Museum of African American History and Culture. “There is a common misconception that young children are ‘color blind’ and untouched by prejudice. Research shows that from infancy, children are developing mental maps that lead to their baseline racialized identity and social status before the age of six. Early childhood education has the power to guide racial and social identities to a healthy place.”

All ECEI programs are tailored to the different ages and developmental stages of early childhood (birth to eight years old). Programming themes and projects change each month—there is always something new for children.

Early Childhood Programming at the Museum

Cultural Cuddles programs invite children from birth to twelve months of age to bond, play and discover color. Alongside their favorite grown-ups, children can explore art materials using different colors. A six-month-old baby recognizes skin color and notices when a color is familiar or unfamiliar. Talking to a baby about colors, including skin colors, can create a comfort level to later discuss racial identity.

Toddling Treasures are programs created for children thirteen–thirty-five months of age. Toddlers by the age of two are able to use racial categories to reason about people’s behavior. Talking to children about how everyone is the same but also different, enhances critical thinking skills and allows children to see others as unique individuals.

Cultural Kids is for children ages three-five years old. In this program, children listen to stories and create artwork that engage the senses. Because children at this age are able to begin to understand the complex social construct of race, the program introduces skin color with parents and explains how children get their color from their parents. The goal is to show how every person’s skin is different, every family is unique and there is beauty in diversity.

Friends for Freedom are programs created for early elementary students, children six-to-eight years old. With an adult, children look at museum objects, read a featured picture book and have guided conversations and to explore personal meaning and fairness. Because children ages six-to-eight years old are able to have conversations about injustice and unfair treatment based on identities like race and gender, this program centers on the differences among people and teaches children to respect and embrace differences. This programming helps children prepare to act against bias and unfairness.

In addition to the regular scheduled programming mentioned above, the museum offers “pop-up” versions of these programs in the galleries and classrooms on the second floor. The pop-up schedule is available at the museum’s information desk.

Sing-alongs, concerts and story times for children and workshops and panel discussions for the adults invested in early childhood education are offered quarterly, and the schedule is available on the museum’s website at https://nmaahc.si.edu/events/upcoming. Interested participants should check the website frequently for updates.

More information about the National Museum of African American History and Culture’s Early Childhood Education Initiative is available on the museum’s website. A schedule of upcoming events at the museum, some of which require pre-registration, is on the events page of the museum’s website. ECEI’s programming is often most suitable for small classes and fills quickly.

This post is compiled courtesy of the Smithsonian Museum, The National Museum of African American History and Culture, The W.K. Kellogg Foundation, and Wikipedia.

About the National Museum of African American History and Culture

Since opening Sept. 24, 2016, the National Museum of African American History and Culture has welcomed nearly 6 million visitors. Occupying a prominent location next to the Washington Monument on the National Mall in Washington, D.C., the nearly 400,000-square-foot museum is the nation’s largest and most comprehensive cultural destination devoted exclusively to exploring, documenting and showcasing the African American story and its impact on American and world history. For more information about the museum, visit nmaahc.si.edu, follow @NMAAHC on Twitter, Facebook and Instagram or call Smithsonian information at (202) 633-1000.

About the W.K. Kellogg Foundation

The W.K. Kellogg Foundation (WKKF), founded in 1930 as an independent, private foundation by breakfast entrepreneur and innovator, Will Keith Kellogg, is among the largest philanthropic foundations in the United States. Guided by the belief that all children should have equal opportunities to thrive, WKKF works to create conditions in underresourced communities for children can realize their full potential in school, work and life. The Kellogg Foundation is based in Battle Creek, Michigan, and works throughout the U.S. and internationally, as well as with sovereign tribes. Special emphasis is made on priority places where there are high concentrations of poverty and where children face significant barriers to success. WKKF priority places in the U.S. are in Michigan, Mississippi, New Mexico and New Orleans, and internationally in Mexico and Haiti.

Recent in digital publications:
* Five by Jamie Dedes, Spirit of Nature, Opa Anthology of Poetry, 2019
* From the Small Beginning, Entropy Magazine (Enclave, #Final Poems)(July 2019)
* The Damask Garden, In a Woman’s Voice (August 11, 2019) / This short story is dedicated to all refugees. That would be one in every 113 people.

A busy though bed-bound poet, writer, former columnist and the former associate editor of a regional employment newspaper, my work has been featured widely in print and digital publications including: Levure littéraire, Ramingo’s Porch, Vita Brevis Literature, HerStry, Connotation Press, The Bar None Group, Salamander Cove, I Am Not a Silent Poet, Meta/ Phor(e) /Play, Woven Tale Press, The Compass Rose and California Woman. I run The Poet by Day, a curated info hub for poets and writers. I founded The Bardo Group / Beguines, pushers of The BeZine of which I am managing editor. Email me at thepoetbyday@gmail.com for permissions or commissions.