The White Cat and the Monk was a 2016 Christmas gift to me from my son and daughter-in-law. It’s a charmingly illustrated retelling of an old Irish poem, Pangur Bán, a lovely gift and a lovely addition to my bookshelves.

I wasn’t familiar with the poem, so the gift inspired – as such gifts are want to do – a few hours of pleasurable reading and research, an effort lightly akin to the endeavors of the anonymous but renown author of the poem. Pangur Bán was written by a 9th Century monk somewhere inside or in the vicinity of Reichenau Abby, which is on Reichenau Island in Lake Constance in the south of Germany.

There are many translations of Pangur Bán, notably by W. H. Auden and Seamus Heaney. The most famous translation – which turned out to be my favorite – is by Robin Flowler (1881-1946), an English poet and scholar, a Celticist, Anglo-Saxonist and translator of Gaelic.

The Scholar and His Cat, Pangur Bán

I and Pangur Bán my cat,
‘Tis a like task we are at:
Hunting mice is his delight,
Hunting words I sit all night.

Better far than praise of men
‘Tis to sit with book and pen;
Pangur bears me no ill-will,
He too plies his simple skill.

‘Tis a merry task to see
At our tasks how glad are we,
When at home we sit and find
Entertainment to our mind.

Oftentimes a mouse will stray
In the hero Pangur’s way;
Oftentimes my keen thought set
Takes a meaning in its net.

When a mouse darts from its den,
O how glad is Pangur then!
O what gladness do I prove
When I solve the doubts I love!

So in peace our task we ply,
Pangur Ban, my cat, and I;
In our arts we find our bliss,
I have mine and he has his.

Practice every day has made
Pangur perfect in his trade;
I get wisdom day and night
Turning darkness into light.

-translated from the Gaelic by Robin Flowler

THE SECRET OF THE KELLS 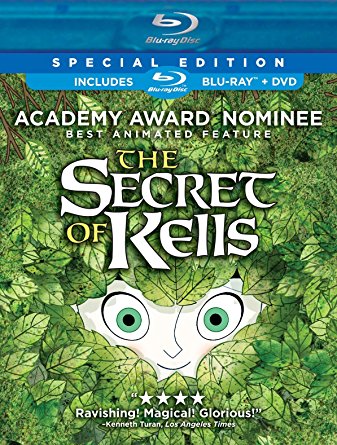 In 2009 the Flatiron Film Company released an animated film, The Secret of Kells, which is inspired by a mix of history, Celtic mythology, magic and fantasy. One of the characters is a white cat, Pangur Bán,  and during the credits Pangur Bán is read in modern Irish.

If you are viewing this by email subscription, you’ll likely have to link through to the site to view this video, the Pangur Bán Song from the film.

The Secret of the Kells is a relief from horrifying news and the overflow of often vapid and violent movie offerings. The pace of the film is relaxed. Unlike a lot of movies, it doesn’t yell at you. It does engage with story and beautiful animation reminiscent of traditional Irish art.

Though the story is a fiction, it is grounded in history: an Ireland besieged by Viking raids and a mythical mystical take on the production and preservation of The Book of Kells, an early illustrated (illuminated) New Testament. The Book of Kells is housed now at Trinity College Library in Dublin. The film incorporates the Irish poetic genre – aisling – developed in Irish poetry of the 17th and 18th centuries and in which Ireland appears in a poet’s dream as a woman – maiden, mother or crone – and bemoans the state of Ireland.

The White Cat and the Monk was written by JoEllen Bogart and illustrated by Sydney Smith. It was short-listed for the Governor General’s Literary Awards, Young People’s Literature (Illustrated Books). It was named New York Times Best Illustrated Children’s Book and listed on Brain Pickings’ Best Children’s Books of 2016.

The Secret of the Kells was nominated for an Oscar and won several other film awards including the Audience Award of the Annecy International Animated Film Festival. It has an overall approval rating of 91% on Rotten Tomatoes where the consensus is “Beautifully drawn and refreshingly calm. The Secret of the Kells harkens back to animation’s gold age …”