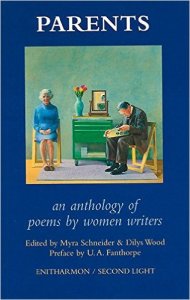 When I noted that Second Light Network of Women Poets (SLN) had produced an anthology of poems about parents, I thought it a wonderful idea. It became the inspiration for the The BeZine’s January theme, Parents and Parenting, and I had to buy a copy.

Parents, an anthology of poems by women writers (Enitharmon, 2000) turns out to be a wonderful collection, moving me to laughter and tears, celebration and remorse through memories that explore the range of experience from loving and nurturing to appalling or abusive. Given the theme, you might expect to find some of the 170 or so poems  to be saccharine or manipulative, but none are. This is, I’m sure, as much a testimony to the taste and discretion of editor/poets Myra Schneider and Dilys Wood as it is to the skill and sensibility of the featured poets.

Particularly touching were the poems that harken back to parents who were refugees during World War II or parents who died during that period. I found these especially poignant partly because many of the elders around me when I was young were refugees from that war and partly because today we have even more people migrating to escape dangerous environments. I can’t help but wonder what poetry will have to say when the children of this diaspora come of age.

About parents as a theme for the collection, U.A. Fanthorpe wrote in the preface:

“I suppose many people, if asked what is the greatest theme of poetry, would say Love, or Time.  It seems clear to me, faced with this fine anthology, that the right answer is Parents.  For parents combine love and time, and in a very striking, difficult way.  The love is often embarrassed, undeclared, too late – tangled in some way.  And the time is reversed; the parent is the child, the child the parent, by the process of time.  So it certainly is here, where the older women see elderly parents as their children, remember the energy and passion of parents who were younger then they are now; or recall their younger, brusque or uncomprehending selves. The originality of the theme with the special insights of women, who are often more vulnerable to their parents than their brothers are, and also less able to escape, adds to the particular qualities of this anthology.”

Both thumbs up on yet another fine collection from the women of SLN.  At this writing Amazon US and UK have one or two new copies and both sites have used copies available.

The January issue of The BeZine will be available on the 15th and, thanks to the generosity of the editors and publisher of the anthology, will include two poems from Parents, an anthology of poems by women writers.

(R)Evolution — 4 poems
Changming Yuan provides provocative poems for our times in this blog post from The BeZine.

The BeZine live 100TPC event, this year in the midst of a global pandemic, racial tensions worldwide but particularly focused around the U.S. Black Lives Matter movement, & raging wildfires related to Climate Change; & war, as always.