Apollo, Apollo!
God of all ways, but only Death’s to me,
Once and again, O thou, Destroyer named,
Thou hast destroyed me, thou, my love of old!
Aeschylus’ Agamemnon

in poems of prophecy

and breaks our hearts

She calls on death

wearied by her fight

Originally published in The BeZine.

Your donation HERE helps to fund the ongoing mission of The Poet by Day in support of poets and writers, freedom of artistic express, and human rights.

“I think; therefore, I am.” René Descartes

Whence it so happened that Descartes left tracks in
John Bunyan who impressed his mind on the way
to William Blake, decent soul that he was. Long ago
we were said to have souls, that mysterious interior
invisible, unknowable. And then things changed.
It was not God so much as that a new burden of knowing
came to be ours. This knowing no bloodless rule, no abstract thing.
Blake no Age of Reason pontificator: “To Generalize is to be an Idiot;
To Particularize is the Alone Distinction of Merit,” Blake wrote.
And here in this, he particularizes, oh how he particularizes.
Christian physically bound in his reading.
Blake kindles hot the near insanity of the meeting,
As his very soul looks right into the physical.

Christian hunched over, hovering, wild eyed.
A look nearly of terror and unearthly joy woven into
the silent shouting shock of reading alone like this.
That bunch of heavy brown modern bears his back down.
Like a hunchback leering, Christian is peering,
Like a frozen loner where Christian has never gone before.
“It is so new,” he says “I am all alone.”
So alone he can’t sort himself out to see
how surrounded he is by dangerous sharp points behind.
Brown peaks assault him from afar, vulnerable as he all be.
This new man, making progress on this new journey of himself.

He is reading in his book. Reading like taking a deep plunge
into the visionary unknown Blake so admires:
“The man who never in his mind and thoughts travel’d to heaven is no artist.”
And the person who does not get hysterically lost doesn’t start to see.
Wounding, piercing brown ochre colors and open slopes
mark Christian in his place as new man trapped in himself.
Christian’s gasping face besieged by what Dr. Johnson,
early psychologist, once called “the invisible riot of the mind.”
Christian knows too much to voice any of it.
He is all lit up with himself and it. So hauntingly, quintessentially alive,
with a new thing, himself and words to see,
that we would offer him a smoke to ease the strain of his face, if we could,
alleviate his face and quiet his burden with a shared smile.

The other poems in Linda’s Blake-poem series: 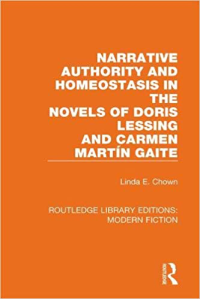 I am delighted to let you know that Linda Chown’s Narrative Authority and Homeostasis in the Novels of Doris Lessing and Carmen Martín Gaite (Routledge Library Editions: Modern Fiction) is now available through Amazon in hardcover and Kindle. Linda tells me a budget-wise paperback edition will be available in six-to-eight months.

This study, originally published in 1990, assesses a shift in the presentation of self-consciousness in two pairs of novels by Doris Lessing and Carmen Martín Gaite: 1) Lessing’s The Summer Before the Dark(1973) and Martín Gaite’s Retahílas (1974) and 2) Lessing’s The Memoirs of a Survivor (1974) and Martín Gaite’s The Back Room (1978). Three major structural divisions facilitate examining implications of the novels for 1) feminism 2) literary narrative and 3) the lives of people-at-large. / J.D.

Recent and Upcoming in Digital Publications: Five by Jamie Dedes on The World Literature Blog,  Jamie Dedes, Versifier of Truth, Womawords Literary Press, November 19, How 100,000 Poets Are Fostering Peace, Justice, and Sustainability, YOPP! * The Damask Garden, In a Woman’s Voice, August 11, 2019 / This short story is dedicated to all refugees. That would be one in every 113 people. * Five poems, Spirit of Nature, Opa Anthology of Poetry, 2019 * From the Small Beginning, Entropy Magazine (Enclave, #Final Poems), July 2019 * Over His Morning Coffee, Front Porch Review, July 2019 * Three poems, Our Poetry Archive, September 2019