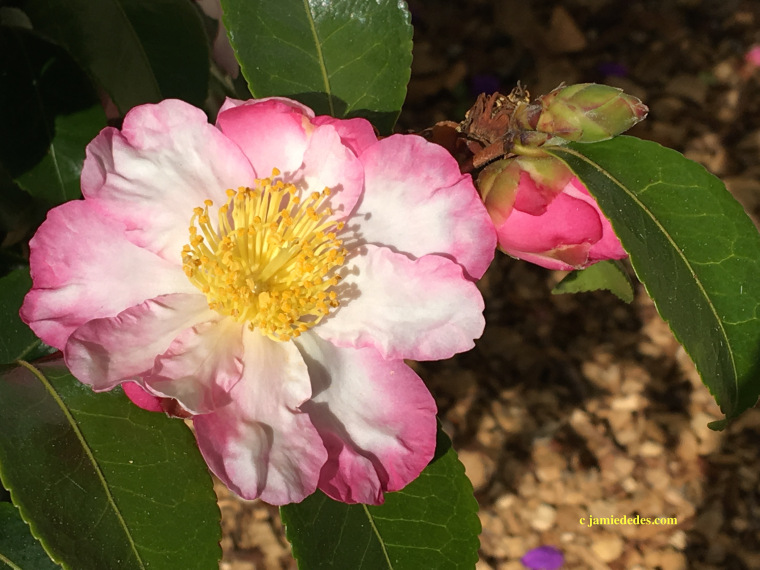 One Lifetime After Another

one day, you’ll see, i’ll come back to hobnob
with ravens, to fly with the crows at the moment
of apple blossoms and the scent of magnolia ~
look for me winging among the white geese
in their practical formation, migrating to be here,
to keep house for you by the river …

i’ll be home in time for the bees in their slow heavy
search for nectar, when the grass unfurls, nib tipped ~
you’ll sense me as soft and fresh as a rose,
as gentle as a breeze of butterfly wings . . .

i’ll return to honor daisies in the depths of innocence,
i’ll be the raindrops rising dew-like on your brow ~
you’ll see me sliding happily down a comely jacaranda,
as feral as the wind circling the crape myrtle, you’ll
find me waiting, a small gray dove in the dovecot,
loving you, one lifetime after another.

I was diagnosed with interstitial lung disease twenty-one years ago. I was given two years to live. Thanks to loving family support and excellent state-of-the-art medical care, I’m still alive and kicking. As the disease continues its progression, however, my activities have become increasing constrained. Over the past two years I’ve slowed down dramatically. I am holding the Zine back from fulfilling its wide promise. I find it hard to keep up with obligations and to honor my own ambitions and the prodigious talents and boundless ideas of my colleagues. The long-standing lung issues have evolved into respiratory and heart failure. Other challenges to productivity have popped their disconcerting heads. These include pulmonary hypertension and a rare blood cancer, uncurable but manageable. There is, however, good news.

I’ve had years none of us expected I’d have, years to enjoy my family, my friends, lots of music, reading and writing. I got to see my world-class son married. I’ve been able to spend time getting to know my beautiful multi-talented daughter-in-law and to visit with my cousin Dan when he came home to the States after years of living abroad. Daniel (now Fr. Daniel S. Sormani, C.S.Sp) and I grew up together. He is more like a brother to me than a cousin. Ultimately, I had the pleasure of forming an arts for peace community.

I began blogging in 2008 (The Poet by Day) and in 2011 I founded Into the Bardo with San Francisco Bay Area Poet Ann Emerson and Rob Rossel, a therapist and nature writer. Ann had a rare bone cancer and Rob faced cardiovascular problems. Our intention was to chronical living with dying. My friends preceded me into the bardo after just three years. I had to ponder what to do next.

I decided to broaden the scope of the blog, to create a platform for the global expression of peaceable minds, diverse perspectives and cultural understanding. This was a conscious effort to create a virtual space where we could find the commonalities across borders and learn that our differences are so often benign, not threatening. I found talented high-minded folks and a team slowly emerged. We grew from three members to twelve and a subscription base of a few hundred to one that is over 20,000.

We expanded our outreach joining with Washington State Methodist Minister, the Rev. Terri Stewart, and Beguine Again, our sister site. We became a larger presence via Twitter (thanks to Terri Stewart), a Facebook Page (The Bardo Group Bequines), and two Facebook Groups: The BeZine 100TPC (that is, 100,000 Poets and Friends for Change) and The BeZine Arts and Humanities Page. The idea behind the former is to share good news, the “best practices” that are happening all over the world and can be inspiration for initiatives in other areas. The idea behind the arts and humanities page is to give people a place to share the wide range of arts we all engage with or practice and to underscore the fact that “The BeZine” is not just or even primarily a poetry site. We welcome and encourage all types of creative expression.

I have led this effort since 2011 as manager, editor, and recruiter, but it is now time for me to bequeath this grace-filled platform into the hands of the rest of The Zine Team. Some of the support we get from team-members is quiet. You may not be aware of these stalwart and mostly behind-the-scene visionaries. Hence here is a list of the Zine team members.

WHAT WOULD HAVE BEEN MY NEXT SUGGESTED BIG EFFORT?: The BeZine Educational Blog-Radio Shows:

And how about a Zine anthology? The sales might help with the maintenance of this site and its activities as well as promoting and acknowledging our talented contributors.

I’d have loved to be involved in helping to bring such work to the fore. What do you think? Share your thoughts and preferences in the comments section below. Enthusiasm is encouragement. Maybe the team will decide to move forward on these ideas. It’s up to them, of course. They probably have some other and better ideas themselves. One way or another, whatever The Zine Team decides to do, it will be magnificent. Guaranteed.

With love from the edge of eternity,
Jamie Dedes
The BeZine Founding Editor, Editor Emerita

Are you artistically inclined? Do you believe in raising awareness about important issues like Peace, Environmental Sustainability and Social Justice? Would you like a chance to display your visual arts talent to a global audience for a whole year? Could you use an Amazon Gift Card?

If this sounds like you, then we want to see your art! The BeZine 100TPC (One Hundred Thousand Poets for Change) is holding an open contest for our 2021 Banner. This respected online magazine showcases both budding and well-established, professional talent from poets, musicians, and all manner of artists from all over the world. The BeZine reaches a global audience of thousands of people and continues to attract additional readers, followers, and subscribers. Artists who are interested are encouraged to check out our site at: https://thebezine.com/ to see the kinds of things we publish, as well as read our mission statement and publishing guidelines.

There is no entry fee. Only one entry per person, please.

You may use any medium, but the final submission needs to be a digital format picture or slide (.jpg, .png or .bmp). Banners need to be: 820px x 360px (or 6.8” L x 3” H) so that we may also use it on our Facebook page. All entries should be mailed to dragonkatet2000@yahoo.com, and the Subject Line should read: ATTN The BeZine 100TPC Banner .