I think it was Borges who used to remind us that poetry began as an oral tradition and that in these days of print it is still meant to be read out loud. This hit home for me recently when a friend read one of my own poems at a funeral service and when British poet, John Anstie, recorded his reading of another of my poems. Even though I had written these poems and labored over their births, they gained a new dimension for me in the hands of these good poets who also happen to be good at oral delivery. On that note, I take special joy in the poetry of David Whyte and I particularly appreciate his skilled readings of his own work and that of other poets. In the video below David reads and interprets Rilke’s The Swan and Walcott’s Love After Love. I listen to his readings of these two renown poems several times a week and never tire of hearing them. Jamie 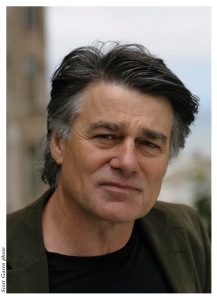 Poet David Whyte grew up with a strong, imaginative influence from his Irish mother among the hills and valleys of his father’s Yorkshire. He now makes his home, with his family, in the Pacific Northwest of the United States.

The author of six books of poetry and three books of prose, David Whyte holds a degree in Marine Zoology and has traveled extensively, including living and working as a naturalist guide in the Galapagos Islands and leading anthropological and natural history expeditions in the Andes, the Amazon and the Himalaya. He brings this wealth of experience to his poetry, lectures and workshops.

His life as a poet has created a readership and listenership in three normally mutually exclusive areas: the literate world of readings that most poets inhabit, the psychological and theological worlds of philosophical enquiry and the world of vocation, work and organizational leadership.

An Associate Fellow at Templeton College and Said Business School at the University of Oxford, he is one of the few poets to take his perspectives on creativity into the field of organizational development, where he works with many European, American and international companies. In spring of 2008 he was awarded an honorary doctorate from Neumann College, Pennsylvania.

In organizational settings, using poetry and thoughtful commentary, he illustrates how we can foster qualities of courage and engagement; qualities needed if we are to respond to today’s call for increased creativity and adaptability in the workplace. He brings a unique and important contribution to our understanding of the nature of individual and organizational change particularly through his unique perspectives on Conversational Leadership.