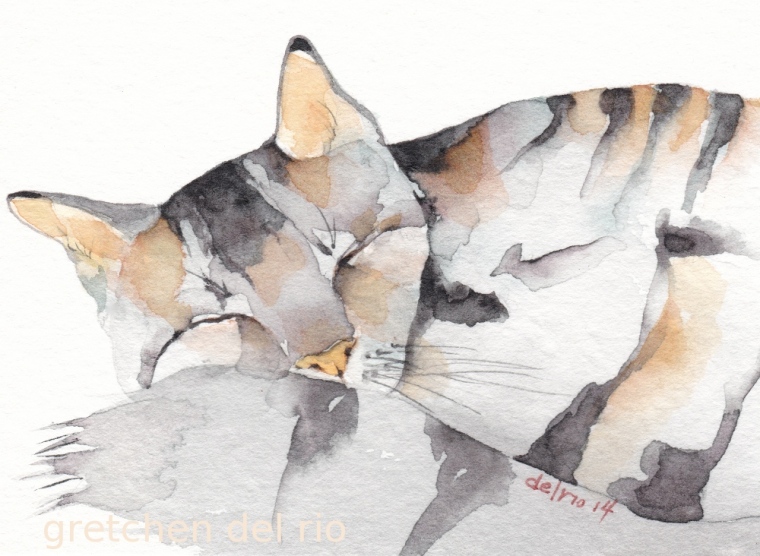 Aren’t they amazing. Cats totally relax. All the bones in their body soften. Just when you least expect it…..they hear a noise and all the bones become rigid again and they spring into action. Well, they don’t worry so they are always in their body.

“Don’t think of what’s past!” said she. “I am not going to think outside of now. Why should we! Who knows what tomorrow has in store? ” Thomas Hardy, Tess of the D’Urbervilles

I leant upon a coppice gate
When Frost was spectre-gray,
And Winter’s dregs made desolate
The weakening eye of day.
The tangled bine-stems scored the sky
Like strings of broken lyres,
And all mankind that haunted nigh
Had sought their household fires.

The land’s sharp features seemed to be
The Century’s corpse outleant,
His crypt the cloudy canopy,
The wind his death-lament.
The ancient pulse of germ and birth
Was shrunken hard and dry,
And every spirit upon earth
Seemed fervourless as I.

At once a voice arose among
The bleak twigs overhead
In a full-hearted evensong
Of joy illimited;
An aged thrush, frail, gaunt, and small,
In blast-beruffled plume,
Had chosen thus to fling his soul
Upon the growing gloom.

So little cause for carolings
Of such ecstatic sound
Was written on terrestrial things
Afar or nigh around,
That I could think there trembled through
His happy good-night air
Some blessed Hope, whereof he knew
And I was unaware.

The poem was originally titled By the Century’s Deathbed: 1900 and was published in the Graphic and subsequently in a collection, Poems of Past and Present.

Thomas Hardy OM (1840 – 1928) was an English novelist and poet. A Victorian realist in the tradition of George Eliot, he was influenced both in his novels and in his poetry by Romanticism, especially William Wordsworth

In 1898 Hardy published his first volume of poetry, Wessex Poems, a collection of poems written over thirty years. While some suggest that Hardy gave up writing novels following the harsh criticism of Jude the Obscure in 1896, the poet C. H. Sisson calls this “hypothesis” “superficial and absurd.” In the twentieth century Hardy published only poetry.

Thomas Hardy wrote in a great variety of poetic forms including lyrics, ballads, satire, dramatic monologues, and dialogue, as well as a three-volume epic closet drama The Dynasts (1904–08), and though in some ways a very traditional poet, because he was influenced by folksong and ballads,he “was never conventional,” and “persistently experiment[ed] with different, often invented, stanza forms and meters, and made use of “rough-hewn rhythms and colloquial diction.”

Hardy wrote a number of significant war poems that relate to both the Boer Wars and World War I, including “Drummer Hodge”, “In Time of ‘The Breaking of Nations'”, and “The Man He Killed”; his work had a profound influence on other war poets such as Rupert Brooke and Siegfried Sassoon. Hardy in these poems often used the viewpoint of ordinary soldiers and their colloquial speech. A theme in the Wessex Poems is the long shadow that the Napoleonic Wars cast over the nineteenth century, as seen, for example, in “The Sergeant’s Song” and “Leipzig”.The Napoleonic War is the subject of The Dynasts.

Some of Hardy’s most famous poems are from “Poems of 1912–13”, part of Satires of Circumstance (1914), written following the death of his wife Emma in 1912. They had been estranged for twenty years and these lyric poems express deeply felt “regret and remorse”.[41] Poems like “After a Journey,” “The Voice,” and others from this collection “are by general consent regarded as the peak of his poetic achievement.” In a recent biography on Hardy, Claire Tomalin argues that Hardy became a truly great English poet after the death of his first wife, Emma, beginning with these elegies, which she describes as among “the finest and strangest celebrations of the dead in English poetry.”

Many of Hardy’s poems deal with themes of disappointment in love and life, and “the perversity of fate”, but the best of them present these themes with “a carefully controlled elegiac feeling”. Irony is also an important element in a number of Hardy’s poems, including “The Man he Killed” and “Are You Digging on My Grave”. A few of Hardy’s poems, such as “The Blinded Bird,” a melancholy polemic against the sport of vinkenzetting, reflect his firm stance against animal cruelty, exhibited also in his antivivisectionist views and his membership in The Royal Society for the Prevention of Cruelty to Animals.

Although his poems were initially not as well received as his novels had been, Hardy is now recognised as one of the greatest twentieth-century poets, and his verse has had a profound influence on later writers, including Robert Frost, W. H. Auden, Dylan Thomas, and, most notably Philip Larkin.

THE POET BY DAY, WEDNESDAY WRITING PROMPT will return next Wednesday, January 8.

The Poet by Day officially endorses Bernie for President.

“Thick as the speed of clotted thoughts,
This language suffices;
A cumbersome tool.…”

A poem by Corina Ravenscraft “…about the limits of the written word and language.…”