The ICSD staff and participants from around Jerusalem gathered in Tmol Shilshom to perform and speak about faith and ecology through the art of poetry on June 30.  Michael Deckel discussed the human relationship with God and how we want a connection but cannot have one without striving to create meaning in the world.

Even lizards hide from this scorched heat.
Tristram’s grackles pant in the shade of skeletal acacia.
Fan-tail ravens float on rising currents like vultures.

David hid from Saul in the strongholds of En Gedi;
along the wadi now named for him, waterfalls
drop warm water onto maidenhair ferns into tepid pools.

We escape, fugitives from kings
into what little shade we find, wade
into green puddles of desert water,

for brief respite, solace,
a bright glimmer sliding down
an eroding rock face. 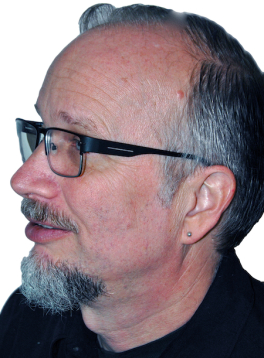 MICHAEL DICKEL (Fragments of Michael Dickel), a poet, fiction writer, essayist, photographer, digital artist, and educator is a contributing editor for The BeZine, was associate editor and contributing editor of The Woven Tale Press, managing editor of arc-24 (2015) and arc–23 (2014), and co-edited Voices Israel Volume 36 (2010). His latest book of poems is War Surrounds Us. Previous books include Midwest / Mid-East and The World Behind It, Chaos, an eBook from “why vandalism?” that is no longer available online. Dickel is the Chair of the Israel Association of Writers in English.

Dickel’s work was short-listed for the Wisehouse 2016 Poetry Award and has appeared in literary journals, anthologies, art books, and online for over twenty years. His photographs and poems have appeared in: THIS Literary Magazine, Eclectic Flash, Cartier Review, Pirene’s Fountain, Sketchbook, Emerging Visions Visionary Art eZine, Poetry Midwest, Fotógrafos En La Calle (Street Photographers), why vandalism? [1, 2, 3, 4], Poetica Magazine—Reflections on Jewish Thought, Zeek: a Jewish Journal of Thought and Culture and Abramelin: the Journal of Poetry and Magick, among many others (a selection of recent publications can be accessed on the Links page). Two of his poems received first and second place in the 2009 international Reuben Rose Memorial Poetry Competition.

He has also worked with documentary film productions, writing everything from fund-raising proposals to research to treatments and scripts. Working with David Fisher, he wrote a successful proposal for a U.S. National Endowment for the Humanities Bridging Cultures through Film Development Grant.

Michael (Dickel) Dekel, Ph.D., holds degrees in psychology, creative writing, and English literature. He has been teaching college and university for over 25 years—writing and literature courses in the United States and Israel – as well as courses in media and English Education in Israel. He directed the Student Writing Center at the University of Minnesota and the Macalester Academic Excellence Center at Macalester College (St. Paul, MN). He currently lectures at Kibbutzim College (Tel Aviv). Dr. Dickel has published articles, presented conference papers, and led workshops on writing and the teaching of academic writing. He currently lives in Jerusalem, Israel.