BRAVO! to the people, the church groups, the civic groups, the students and the schools, the poets, the musicians and the artists who bare witness to the times, the historians who remind us of our roots and their lessons, the lawyers who clarify the law and fight for justice, and journalists who investigate and speak out. Bravo! to the women who are the stewards of heart for all their joyousness, their spirited defiance and their hope and faith. Bravo! to the man at the Women’s March on Washington who carried a sign saying, “I think it’s time that white men stopped talking and started listening.”

THIS WEEKEND I was proud that in the midst of fear and contention the majority of protesters were peaceful and respectful.

OFF THE CUFF/STRAY THOUGHT Perhaps it would be wise to replace “Love” with “Respect,” which is really what would be more fitting in this context and perhaps serve as a better reminder of honorable behavior and speech.

The work has just begun. Here are some resources as we move on:

And the last and perhaps most important: REQUIRED READING. The Third Reconstruction: How a Moral Movement Is Overcoming the Politics of Division and Fear by The Rev. Dr. William J. Barber II

In April 2013, Rev. Barber began leading regular “Moral Mondays” civil-rights protests in North Carolina’s state capital, Raleigh. He is credited with bringing together a fusion movement to protest restrictions on voting and to reform state govenement. He is said to be responsible for shepharding in a new era of progressive politics. 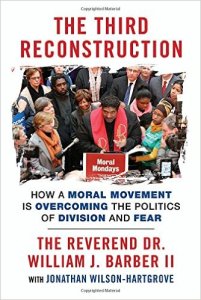 The Third Reconstruction is a memoir about how Rev. Barber and his diverse allies (hence the “fusion”) came together to build a coalition. He shares his analysis of race-based inequality along with hopeful message for our United States as it continues to work toward the healing of entrenched racial and economic injustice. Ultimately, The Third Reconstruction is a blueprint for a movement, for  building coalitions and an inspiring call to action from the “twenty-first century’s most effective grassroots organizer.”