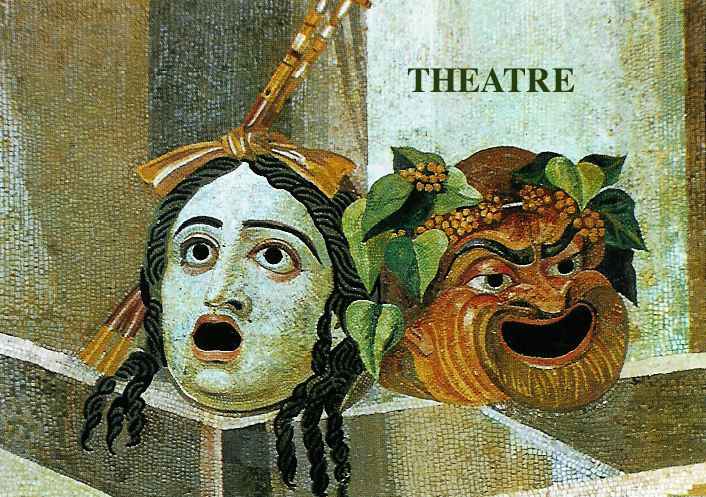 In the introduction to his translation of Beowulf, Seamus Haney comments that “as a work of art it lives in its own continuous present.” For me, theatre (whether in its broadest or narrowest sense) is very much the same. Theatre always encourages us to be in that continuous present. As an over-arching art form it can integrate every other form of human (and even animal) expression. It usually rewards our engagement and disdains our detachment. Even when a show runs for a thousand performances, it can never be quite as canned, as mass produced as many of our other entertainments. Human variability is on display every night.

More broadly, theatre tends to mean any place in which we think there is a scripted or specialized drama occurring. In that sense it often indicates that we’re seeing a performance driven by an agenda and perhaps designed to deceive. We criticize this as hypocrisy. In ancient Greece, a hypocrite was merely an actor, i.e. one who had made a judgment or assessment of a script when preparing to perform that script for others. At that time, it was also thought unworthy for actors to become politicians since actors were skilled at impersonation. We could not know their true selves.

In the context of our art, we would probably judge this as unfair. We’ve all had the experience of “donning the mask” or crafting a persona as a way of freeing ourselves. In expressing the lie, we hope to tell the truth.

I’m delighted to be Guest Editor this month. It coincides with a production that I’m currently in. This is an experimental production staged as immersive experience. We’re telling the story of a family in crisis (the passing of parents, dealing with aging and the end of life, and the break-up of relationships). We tell this story in a residence where small audience groups (a dozen to two dozen at a time) sit in the “living rooms” of the characters. This intimacy connects us with our audience. They do not participate in the sense of interacting with the actors. But, they are side-by-side with us as we make the journey, watching us, crying with us, laughing with us and even eating with us. Detachment is not an option. We join together in the continuous present.

This month’s pieces remind  us of these connections and touch on so many of the stages on which we act.

Priscilla Galasso speaks of her experience with theatre and its broad impact in her life. “Playing the muck of human behavior” as she says.

Charles W. Martin’s poetry talks passionately of life’s stage, reminding us that, yes, detachment is not an option.

Corina Ravenscraft gets to the root of why we should all spend time in “the seeing place.” It’s a broadside worth taking around when it comes time to fund arts in schools and communities.

Michael Watson recounts an early experience where his personal humiliation also reflected larger and deeper ones around him. He shows us how Playback Theatre is another powerful way to connect.

John Anstie recounts the life of his mother. In reading her story, I think on the many roles we are often forced to play and how we adopt certain personas to help us survive.

I feel that basic joy of theatre in Renee Espriu’s contribution. “The hills are alive…” means a little more to me now than it did before.

Jamie Dedes points us to theatrical entertainment with its golden moments and the theatre of life with it’s chaos and absurdity. [And, seriously, check out Fanny Brice’s physical comedy.]

John Sullivan’s four poems this month are, for me, intriguing and searching meditations on the self. They speak to who we are, the personas we have, the masks we wear, the music we sing. And, he’s allowed us to publish an excerpt from his new play, Hey Fritz, Looks Like You Lost It All Again in the Ghosting.

Naomi Baltuck’s discussion of Come From Away focuses right in on an essential aspect of our experiences both in life and in theatre. Specifically, I’m thinking about what it means to literally commune with strangers, whether it’s the characters in Come From Away or the audience who watches it.

Karen Fayeth shows how, no matter what size or shape the spectacle, there is something profound in the simplest of relationships. Say, between a boy and his horse. Because, whether we’re seeing animals at play or a play about animals we are moved.

In bringing together both her visual art and her poetry, Sonja Benskin Mesher has each explain the other. And, yet, each also enlarges the other and perhaps we see our own actions a little differently, too.

Of course, plays and poetics go hand-in-hand. Michael Dickel thoughtfully discusses how one arises from the other and the personal origins of both.

Paul Brookes’ poems read as very modern, but also touching on things quite old, such as shared rituals and the hypocrisy of actors (in the classical sense).

And, finally, there’s a last word from Denise Fletcher. I hope we’ve achieved a kind of success along the lines of what she describes.

Thank you to all who contributed this month and for letting me join the show. I’m having a wonderful time! I look forward to seeing where the story goes from here. And, to the last one who leaves the theatre, please turn on the ghost light.

How to read this issue of THE BEZINE:

Photograph: Gargoyles as theatrical masks above a water basin. Mosaic, Roman artwork, 2nd century CE. The piece can be found at the Capitoline Museum in Rome, Palazzo dei Conservatori, first floor, hall of the Horti of Mæcenas. From the Baths of Decius on the Aventine Hill, Rome.

Except where otherwise noted,
ALL works in The BeZine ©2017 by the author / creator

The BeZine, Be Inspired, Be Creative, Be Peace, Be

Announcing the winner(s) of The BeZine Banner Art Contest!

Our theme for September is “Social Justice,” in an effort to call awareness to global poverty, homelessness, and inequality. And we are celebrating the 10th anniversary of 100 Thousand Poets for Change (100TPC).

100TPC Save the Date for 10th Anniversary Global Event

100TPC History In September 2011, Michael Rothenberg and Terri Carrion saw their idea and month of work come to fruition—the first 100 Thousand Poets for Change (100TPC) worldwide poetry events, held on the last Saturday in September. Little could they imagine back then that it would continue and grow for the next ten years! This […]

All Africa Poetry Symposium in Celebration of 100 Thousand Poets for Change 10-Year Anniversary—
You are welcome to attend and we look forward to presenting an exciting, dynamic and vibrant Poetry Symposium, where Africa speaks of itself through poetry.