“If we survive, we may have to analyze our engagement with dark matters that
that put life at risk. If we don’t, we are to blame for our end.
For now, let’s keep hygienic, keep to ourselves, bury our Dead, care for the
dying and think of how we have arrived at where we are.” Mbizo Chirasha

Editor’s Note:  This is Mbizo’s response to the last Wednesday Writing Prompt.  The rest of the poems will be published tomorrow (Tuesday) as usual. Posting his poem on its own allows me to remind everyone that we still seek safe harbor for Mbizo in his exile from Zimbabwe.  If you can help with donations toward meeting immediate needs or with leads to possible host families, please let me know at bardogroup@gmail.com.  Thank you! / J.D.

The world has known divisions for as long as history can remember. From
strength that overrides others to the weakness that attracts marauding gangs
of men of ambition and cunning. Adventure has led some into what they
termed “discoveries” of Rivers and their sources, of Mountains high and
majestic, and a people so different in their cultural environments, that to
the eye of a visitor, they appeared other worldly.

The world has never run short of divisive tools and terms to keep one for
each. From the irony of heights and weights, to the delight’s and
indecency of dark humor based on foods and drinks and a people’s culture.
GOD and god’s have their roles and stamps on a people’s interpretations,
raging from waging wars to convert and dominate, to whole sale massacres
because others beliefs were less acceptable to a deity followed by a
muscular power. In the name of many known Faiths , man has suffered
immensely and continue to suffer even under the full glare of a world that
is so connected, that nothing escapes the owl eyed social Media/internet
never sleeping eyes.

If it’s not belief it’s something else that pits one man to another. Color
has played the worst card in segregation of humanity. Regimes are known to
have come up with a cultic panacea of annihilating all who were less than
their proscribed hue, height and eye color in a so called super race.

Commerce has not particularly done well to hide i’s dismal take on the
lesser endowed in terms of what the world considers GDP….Countries are
graded into first, second and third world. Countries comprise individual
human beings. Once categorized in numerical terms, they cease to have a
human quality and adopt a statistical stature.

Dehumanizing poverty by demonizing it and those suffering
the “pauper malady”. Terms like ” those who survive under
a dollar a day. A people labelled by lack. Another labelled by luck.

Then came weaponry and sophistication. Guns and canned Carnage. Bombs
as heroism spoke to the Sky over Nagasaki and Hiroshima. More divisions
follow. Giants with cold threats lying under silos of frozen homes awaiting
disagreements. What a time of it the world had! But like all eras, this too
came to an end with trumpets of fragmentation scattering the deadly
embers of stored caches of annihilation finding its ways into eager
markets of rogue juvenile quarters ready to tussle for positions of
“global respect” through “fire power”

Ideology made no sense. Religion was cowed. No one was immune to the future
that loomed on the human collective heads as each goon state thumped it’s
nukes chest.

A new baby was born in the East. A baby with an attitude like a thief.
Escaping its parents unloving gloved hands, it flew first into the
neighborhood, dropping its ghastly feaces on the heads of its makers kin.
Death. Sinister death. The wind took the birdling over the boarder, across
the oceans on the comforts of cruise ships. And luxury living became a
nightmare. Right now, quarantine is not for rabid dogs or leppers in their
colonies.

It’s what no longer divides that divides us. What irony! We are faced by an
enemy of our own intellect taken over concious. Our own intelligence
exceeding common sense. Our own genius gone insane.
In it all, regardless of mitigation measures,one thing speaks a human
language. It’s no longer about class, color or Creed. it’s not even about
ideology or theology. It’s about being careful to survive the monster we
have made. And the world suddenly speaks “humanese”

How I wish we didn’t have to face such an ugly and tragic catastrophe to
bring us to the realization of the folly of excessive greed in pursuit of
glory and power over others.

If we survive, we may have to analyze our engagement with dark matters that
that put life at risk. If we don’t, we are to blame for our end.
For now, let’s keep hygienic, keep to ourselves, bury our Dead, care for the
dying and think of how we have arrived at where we are.

While at it, let’s pray. For regardless of our form of worship, days of
worship, mode of worship and the dress code in worship, we all pray to a
Higher power. He may yet hear our prayers and led a hand.

Only true saints are at work. Those medics and their assistants and the
guys who must fill the supermarket shelves with your basics.
If you ask me, the very deity we seek in those buildings, is inside us and
those selfless humans who take chances with their lives to take charge of
ours. They are the ones mellowing down the iron wind of a viral onslaught
on humanity right now. 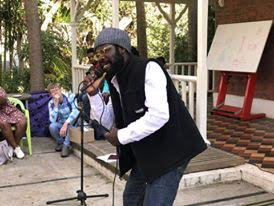 MBIZO CHIRASHA (Mbizo, The Black Poet) is one of the newest members of The BeZine core team. He is a poet from Zimbabwe who is on the run. We have been coordinating in the search for safe harbor. In part I am doing this today to remind everyone that while we’ve made progress with funding, we still need to find a host for Mbizo, preferably Germany, but England or U.S. would work too.  Open to suggestion.  Connect with me if you are able to help, have leads, or have questions. You can read more about Mbizo and his story: Zimbabwean Poet in Exile: Award-Winning Poet Mbizo Chirasha, A Life on the Run, Interview.

A Time for God This is the time for God, for a roaring sonorous voice, a biblical moment, indeed, when we’re shouldering the slaughtered daily, trying to assuage the fire of fear in and around us, when leaders spring forth and speak with the hallowed tone of the ancient tabernacle. Ages old salt smells, a […]

I need to air out my brain I say to the walls that never reply will they miss me? will they even notice I am gone? I clip on my helmet and mount my bicycle she is stiff not an easy ride but she has taught me so much as my feet spin slowly the […]