Max Ritvo was born in Los Angeles, California on December 19, 1990  A graduate of Harvard-Westlake School in Los Angeles, Ritvo earned his BA in English from Yale University, where he edited a literary magazine and performed with a sketch comedy troupe, and his MFA in Poetry from Columbia University. In 2014, he was awarded a Poetry Society of America Chapbook Fellowship for his chapbook AEONS. On August 1, 2015, he married Victoria Jackson-Hanen, a Ph.D. candidate in psychology at Princeton University, in a ceremony officiated by the poet Louise Glück. He was a poetry editor at Parnassus: Poetry in Review and a teaching fellow at Columbia. 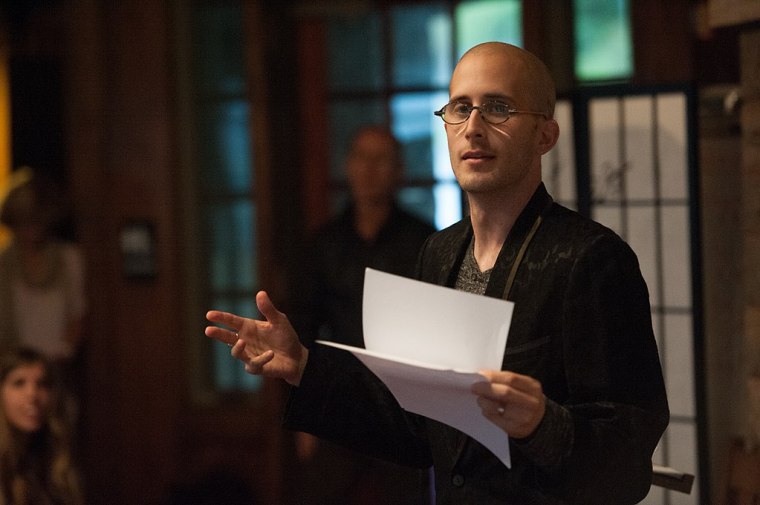 Ritvo was diagnosed with Ewing’s sarcoma (a rare pediatric cancer) at age sixteen and died from the disease at his home in Los Angeles on August 23, 2016.

Ritvo’s work has appeared in Poetry, The New Yorker, Boston Review and as a Poem-a-day on Poets.org. He gave numerous written and radio interviews before his death.

Four Reincarnations, a full-length collection of Ritvo’s poems, was published by Milkweed Editions in September 2016.

According to Lucie Brock-Broido of Boston Review, Ritvo is

“a Realist, a gifted comic, an astronomer, a child genius, a Surrealist, a brainiac, and a purveyor of pure (and impure) joy. His work is composed, quite simply, of candor, of splendor, and of abandon.”

Louise Glück wrote of his first published collection that it was “one of the most original and ambitious first books in my experience… marked by intellectual bravado and verbal extravagance.”

Stephen Burt of the Los Angeles Review of Books wrote,

“…the poems are equally conscious of impending death and of the next day’s life, having spent time in a pool of self-skepticism and then emerged shining, shockingly clean…”

Literary critic Helen Vendler reviewed his work and likened him to Keats. She wrote:

“Ritvo had the luck to study at Yale with Louise Glück and at Columbia with Lucie Brock-Broido, and to attract, before his death, many admirers of his ecstatic originality. Although he is inimitable, his example is there for young poets wanting to forsake simple transcriptive dailiness for the wilder country of the afflicted but dancing body and the devastated but joking mind.”

David Orr, reviewing Four Reincarnations for the New York Times, wrote “It is good-humored (“My genes are in mice, and not in the banal way / that Man’s old genes are in the Beasts”), appealingly sly (“Enoch has written / We are made in His image / but God may have many images./ He may want even more”) and at times surprisingly whimsical (“Every day a chicken dies so that my mom may live”). Orr also quoted, then commented on the end of Ritvo’s poem, The Hanging Gardens:

“This is very fine, and if it acquires a sheen of sentiment because of what it suggests will never emerge — that is, more poems from Ritvo — this doesn’t change the fact that a reader knowing nothing of poetry or this author might find it worth rereading. This is the life poetry leads beyond the confines of the poetic career; the life in which lines exist for what they are, not for future lines they might suggest. The life in which an early poem is also a poem, and a first book is also a book.”

In 2017, Milkweed Editions announced the Max Ritvo Poetry Prize, an annual US$10,000 award and publication contract, supported by the Alan B. Slifka Foundation.

Note:  I knew Max Ritvo had a fatal cancer but his death somehow didn’t cross my radar until English poet Reuben Woolley posted an obit earlier this week on Facebook. Such an impossibly sad loss. It has been weighing on me and – however belatedly – I wanted to do a write-up as homage but deadlines and other responsibilities are pressing. Hence, this post is from Wikipedia. Forgive me for not doing my own writeup, though that will come one day. It’s on my ever-lengthening to-do list.

The photos are courtesy of (the first) Ashley Woo under CC BY-SA 2.0 license and, under the same license, (the second) Wayne Miller.

Here is Max reciting My Litter during his self-proclaimed “final tour.” (If you are reading this from an email subscription, it’s likely you will have to link through to the site to view the video.) Max’s Amazon page is HERE. May he rest in peace and may the healing power of the Universe support his wife and family in their lives and loss.