I think it is safe to say that this week’s responses to the last Wednesday Writing Prompt, Environmental Justice, February 7, a gift to us from Priscilla Galasso (scillagrace, striving to live gracefully) and Steve Wiencek (Scholar and Poet Books, EBay and Scholar and Poet Books, Abe Books ), are consistently marked with an awareness and appreciation that gives us hope for the future .

We extend a warm welcome to poet and musician Dick Jones, new to Wednesday Writing Prompt, and a warm thank you to our treasured regulars: Colin Blundell, Paul Brookes, Kakali Das Ghosh, and Sonja Benskin Mesher and to occasional participants Gary W. Bowers and Denise Aileen DeVires. Welcome back!

I’m pleased that Dick chose to write about Abu Ward, a citizen of Aleppo, the city from which my family sailed from the Middle East to come to the United States a little more than a century ago. CNN called Abu Ward the “last Syrian gardener.” He’s not, of course, though there are few like him. Nonetheless, how some support their spirit in the face of a tragedy so monumental is remarkable.

Like my Lebanese grandmother before me, I season my cooking with Aleppo Pepper. I know that it no longer comes from these beautiful people and their cultured city, which was one of the oldest in world. To say the heart aches is understatement. Rest in peace, Abu Ward, and all victims of this multifaceted violence. The peoples of Syria are not forgotten.

Join us tomorrow for the next Wednesday Writing Prompt. All are welcome: novice, emerging or pro. See you then … Meanwhile, enjoy – and perhaps be inspired by – this rather special collection.

‘The presence of the world is flowers’.
Abu Ward

This was the man
who planted flowers

where the bombs
were falling.

This is his son
who kneels alone

by the garden gate.
The dust he pushes

around their stems
with his thumb is where

his father lives now.
And each flower

will lift some dust
as it rises in spring.

Abu Ward (from the Arabic for ‘Father of the Flowers’) maintained his carefully nurtured flower garden during the worst of Assad’s systematic bombing of Aleppo. He was killed by a bomb dropped near his home. His son Ibrahim left school at thirteen to help his father. After Abu Ward’s death, Ibrahim attempted to maintain the garden, which is now closed. Sadly, in this instance, environmental justice has been, as so often, a victim of warfare. 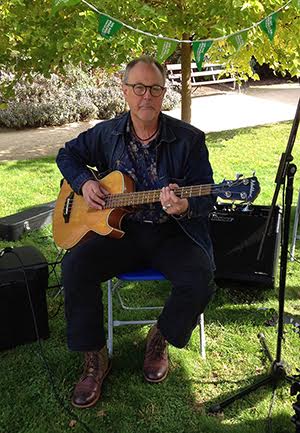 DICK JONES says he was initially wooed by the First World War poets and then seduced by the Beats. He has been exploring the vast territories in between since the age of fifteen. His work has been published in a number of magazines, print and online, including Orbis, The Interpreter’s House, Poetry Ireland Review, Qarrtsiluni, Westwords, Mipoesias, Three Candles, Other Poetry, Rattlesnake and Ouroboros Review. In 2010 he received a Pushcart nomination for his poem Sea Of Stars. His first collection, Ancient Lights was published by Phoenicia Publishing and is available from them or via Amazon. His translation of Blaise Cendrars’ epic poem La Prose du Trans-Siberien… was published in an illustrated collaborative edition with artist Natalie D’Arbeloff by Old Stile Press in 2014. Dick writes lyrics and plays bass guitar in acoustic/electric songwriting trio Moorby Jones.

as you take the road to Paradise

but as you sit in a seat in the garden
you are sitting where Nelson sat
when he said goodbye to Emma;

we have grown to love distillates

essences pantheonized for delectation
bottled genies at our command

A Matter Of England

I walk the matter of England
see lives snatched by unmarked
uniforms, history laid waste
to make a point and remove sting
of sweated labour

I tread the matter of England everytime I chronicle the artificial lake, pit demolished, rails removed, soil has been moved on, seasonal.

is a past pitman.
ancestor, a nailmaker
whose strong coffin nails
stout fasten the woods
grain swish as land without
skeleton to hold its’ skin.

Both open cast places.
where redundancy rips
old features from their faces,
old skulls from beneath their skins.

Redundancy within weeks drains the Dearne from their arteries, smooths disused canals from their cheeks, wetlands asset-stripped from their eyes.

And children sit on father’s knee as on a hill hear how men
made hills a sack of land
a weight of meaning
emptied.

(Land is History is from Paul’s first pamphlet: “The Fabulous Invention Of Barnsley, 1993, revised 2017)

devote lives to prevent decay
of wood, breath, bone, brick,
gardens of our minds,
faculties of our hearts

Each day we weed, we resow,
rework, rebuild
the wood, breath, bone, brick,
gardens of our hearts,
faculties of our minds.

oakgroves of druids
duir means a door
exit and entrance

she used to say “when
one door closes
another opens”

#For Your Future’s Sustenance #

connect with spaces,
you may move differently.
sound different.

a specific style of dancing?

which reveals the environment as a character,

Johann Botha said this.
he is in Pretoria, he is
part of our audience

another sat quietly.
it can be dark.

the date is set.

24 this month
of winter

he asked me what i missed, i told him.

he suggests we look after the environment.

these are the falling days.