“I love paintings within paintings. Stories within stories.” Anita Shreve to Hillary Casavant, Anita Shreve: Solder On, The Writer, March 21, 2014

I was sorry to learn on Friday that Anita Shreve died. She was an American writer, well known for her novels, several of which I read and appreciated. She wrote quite a bit about loss, such a big part of life.

Ms. Shreve started her writing career when she was working as a high school teacher in Reading, Massachusetts. One of her early stories, Past the Island, Drifting (1975), was awarded an O. Henry Prize in 1976. 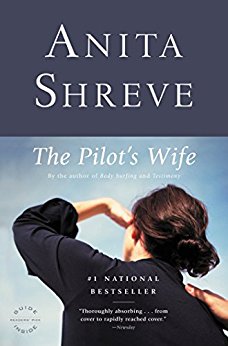 Anita Shreve spent three years working as a journalist in Nairobi, Kenya. In 1999, while she was teaching Creative Writing at Amherst College, Oprah Winfrey called her with the news that The Pilot’s Wife was selected for Oprah’s book club. Since then, Ms. Shreve’s novels have sold in the millions worldwide.

In 2000, her novel The Weight of Water was made into a movie. It was directed by Kathryn Bigelow. The movie starred Sean Penn, Sarah Polley and Elizabeth Hurley. In 2001, her novel Resistance became a film starring Bill Paxton and Julia Ormond. That same year, CBS released The PIlot’s Wife, a movie of the week. It starred Christine Lahti and John Heard.

Ms. Shreve died of cancer on March 29, 2018, at her home at Newfields, New Hampshire. She was seventy-one.