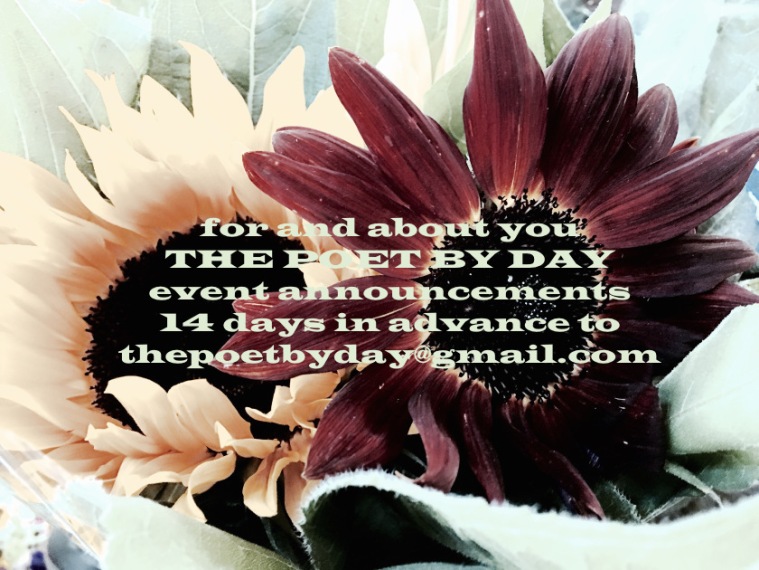 JAZZ CIGARETTE is accepting submissions and says, “we don’t have a type, but traditional verse will have to be pretty good to land here. Send us your sestinas, though … Prose poems and hybrid work will also be considered.” Details HERE.

ISTHMUS is accepting submission for a special issues themed “Politics.”  Editors are reviewing poetry, fiction and creative nonfiction and seek works that speak “to our shared humanity through political engagement; works that bear witness, advocate, and foster authentic dialogue around current issues and events.” Deadline is August 1. Details HERE.

BELO MIGUEL CIPRIANI, award-winning author, former Writer-in-Residence at Holy Names University, currently a columnist for the Bay Area Reporter, named “Best Disability Advocate” by the SF Weekly has published a call for submissions for Essays by the Disabled on Rites of Passage for a proposed collection.  Details HERE.

ANAM CARA WRITER’S AND ARTIST’S RETREAT residencies to poets, fiction writers, and creative nonfiction writers. It is situated Eyeries in County Cork, Ireland, overlooking Coulagh Bay and the mountains and farmlands of the Beara Peninsula.

Anam Cara hosts weeklong workshop-based retreats. Upcoming: “Memory, Secrets, and Immortality: A Crucible for Creativity,” a retreat for women writers and visual artists by poet and nonfiction writer Ione from July 23 to July 29. Also “Lining Our Thoughts,” a poetry workshop taught by poet Leanne O’Sullivan,  from July 30 to August 6. Details HERE. (Honestly, it’s worth visiting the site just to check out the vids. The place is gorgeous.)

OREGON WRITERS COLONY “offers support to writers, from novices to published authors. Members benefit from classes, inspiration from teachers and colleagues, and access to Colonyhouse, a lovely writing retreat on the Oregon Coast.” For more information on the colony and upcoming events link HERE.

CHAOS FILMS (HERE) announced that it has received grants from Conference on Material Claims Against Germany, The Yehoshua Rabinovich Foundation for the Arts and Rabbi Israel Miller Fund for Shoah Research, Documentation and Education toward the making of its film production, Living with Shadows.  This film will “unfold the stories of sexual abuse, subjugation and coercion of Jewish women and men during World War II. This aspect of WWII has largely remained a taboo subject in Israel and internationally. It has had until recently only limited or cursory treatment among scholars. Thus, the subject ends up marginalized in and mostly excluded from collective memory and public discourse about the Holocaust.

“Some women after the war felt they could not marry. Some who mentioned it were shunned. Others could not bear children as a result of the abuse. Most of the victims lived with shame about what happened to them and many avoided sexual relations. These are only some of the wounds, the shadows, these people lived with all of these years. When they arrived in Israel and were not accepted socially, they closed their mouths for decades. Only now, some survivors have begun to tell the stories as part of personal therapy.”

“Doing background research,” explains poet Michael Dickel, “we learned ‘The victims of modern armed conflict are far more likely to be civilians than soldiers. According to UN Action Against Sexual Violence in Conflict, the vast majority of casualties in today’s wars are among civilians, mostly women and children. Women in particular can face devastating forms of sexual violence, which are sometimes deployed systematically to achieve military or political objectives.'” —UN Outreach Programme on the Rwanda Genocide and the United Nations http://bit.ly/29wiG6u

Good luck to Producer Avi Bohbot and Director Ayelet Cohen and the rest of their team.

LIFESAVING POEMS OF SUMMER – twenty-one of them by different poets – are shared after a brief intro by English poet, Anthony Wilson, on his blog Lifesaving Poems. It’s an old post but a goodie.

THE POET BY DAY SUNDAY POESY

Submit your event, book launch and other announcements at least fourteen days in advance to thepoetbyday@gmail.com. Publication is subject to editorial discretion.

“Thick as the speed of clotted thoughts,
This language suffices;
A cumbersome tool.…”

A poem by Corina Ravenscraft “…about the limits of the written word and language.…”